Private-public key pairs are the cornerstone of much of the cryptographic security underlying everything from secure web browsing to banking to cryptocurrencies. Private-public key pairs are asymmetric. This means that given one of the numbers (the private key), it’s possible to derive the other one (the public key). However, doing the reverse is not feasible. It’s this asymmetry that allows one to share the public key, uh, publicly and be confident that no one can figure out our private key (which we keep very secret and secure).

In this introduction to digital signatures, we’ll be talking about a particular class of keys: those derived from elliptic curves. There are other asymmetric schemes, not least of which are those based on products of prime numbers, including RSA keys [1].

We’re going to assume you know the basics of elliptic curve cryptography (ECC). If not, don’t stress, there’s a gentle introduction in a previous chapter.

This is an interactive introduction to digital signatures. It uses Rust code to demonstrate some of the ideas presented here, so you can see them at work. The code for this introduction uses the libsecp256k-rs library.

That’s a mouthful, but secp256k1 is the name of the elliptic curve that secures a lot of things in many cryptocurrencies’ transactions, including Bitcoin.

This particular library has some nice features. We’ve overridden the + (addition) and * (multiplication) operators so that the Rust code looks a lot more like mathematical formulae. This makes it much easier to play with the ideas we’ll be exploring.

The first thing we’ll do is create a public and private key from an elliptic curve.

On secp256k1, a private key is simply a scalar integer value between 0 and ~2256. That’s roughly how many atoms there are in the universe, so we have a big sandbox to play in.

We have a special point on the secp256k1 curve called G, which acts as the “origin”. A public key is calculated by adding G on the curve to itself, \( k_a \) times. This is the definition of multiplication by a scalar, and is written as:

Let’s take an example from this post, where it is known that the public key for 1, when written in uncompressed format, is 0479BE667...C47D08FFB10D4B8. The following code snippet demonstrates this:

Reversing ECC math multiplication (i.e. division) is pretty much infeasible when using properly chosen random values for your scalars ([5],[6]). This property is called the Discrete Log Problem, and is used as the principle behind many cryptography and digital signatures. A valid digital signature is evidence that the person providing the signature knows the private key corresponding to the public key with which the message is associated, or that they have solved the Discrete Log Problem.

The approach to creating signatures always follows this recipe:

The actual signature is created by hashing the combination of all the public information above to create a challenge, $e$:

The hashing function is chosen so that e has the same range as your private keys. In our case, we want something that returns a 256-bit number, so SHA256 is a good choice.

Now the signature is constructed using your private information:

Bob can now also calculate $e$, since he already knows $m, R, P$. But he doesn’t know your private key, or nonce.

Note: When you construct the signature like this, it’s known as a Schnorr signature, which is discussed in a following section. There are other ways of constructing $s$, such as ECDSA [2], which is used in Bitcoin.

Multiply out the right-hand side:

So Bob must just calculate the public key corresponding to the signature $\text{(}s.G\text{)}$ and check that it equals the right-hand side of the last equation above $\text{(}R + P.e\text{)}$, all of which Bob already knows.

Why do we Need the Nonce?

Why do we need a nonce in the standard signature?

Let’s say we naïvely sign a message $m$ with

Now as before, we can check that the signature is valid:

We can show that leaving off the nonce is indeed highly insecure:

How do parties that want to communicate securely generate a shared secret for encrypting messages? One way is called the Elliptic Curve Diffie-Hellman exchange (ECDH), which is a simple method for doing just this.

ECDH is used in many places, including the Lightning Network during channel negotiation [3].

Here’s how it works. Alice and Bob want to communicate securely. A simple way to do this is to use each other’s public keys and calculate

For security reasons, the private keys are usually chosen at random for each session (you’ll see the term ephemeral keys being used), but then we have the problem of not being sure the other party is who they say they are (perhaps due to a man-in-the-middle attack [4]).

Various additional authentication steps can be employed to resolve this problem, which we won’t get into here.

If you follow the crypto news, you’ll know that that the new hotness in Bitcoin is Schnorr Signatures. 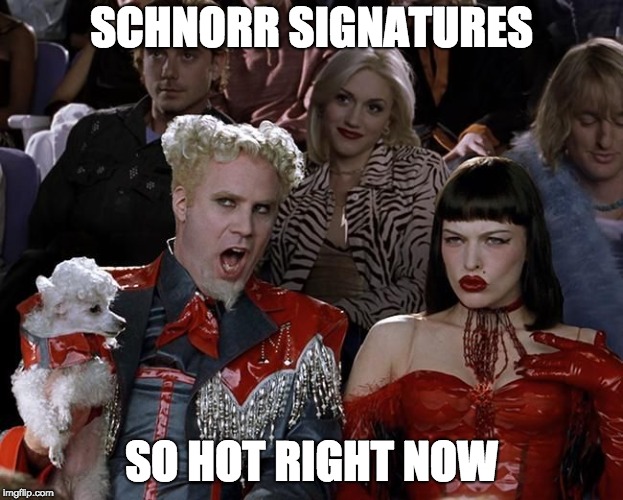 But in fact, they’re old news! The Schnorr signature is considered the simplest digital signature scheme to be provably secure in a random oracle model. It is efficient and generates short signatures. It was covered by U.S. Patent 4,995,082, which expired in February 2008 [7].

So why all the Fuss?

Elliptic curves have the multiplicative property. So if you have two scalars $x, y$ with corresponding points $X, Y$, the following holds:

Schnorr signatures are of the form \( s = r + e.k \). This construction is linear too, so it fits nicely with the linearity of elliptic curve math.

You saw this property in a previous section, when we were verifying the signature. Schnorr signatures’ linearity makes it very attractive for, among others:

Let’s see how the linearity property of Schnorr signatures can be used to construct a two-of-two multi-signature.

Alice and Bob want to cosign something (a Tari transaction, say) without having to trust each other; i.e. they need to be able to prove ownership of their respective keys, and the aggregate signature is only valid if both Alice and Bob provide their part of the signature.

So it looks like Alice and Bob can supply their own $R$, and anyone can construct the two-of-two signature from the sum of the $Rs$ and public keys. This does work:

But this scheme is not secure!

Let’s take the previous scenario again, but this time, Bob knows Alice’s public key and nonce ahead of time, by waiting until she reveals them.

Note that Bob doesn’t know the private keys for these faked values, but that doesn’t matter.

But Bob can create this signature himself:

This works, but it requires another round of messaging between parties, which is not conducive to a great user experience.

A better approach would be one that incorporates one or more of the following features:

MuSig is a recently proposed ([8],[9]) simple signature aggregation scheme that satisfies all of the properties in the preceding section.

We’ll demonstrate the interactive MuSig scheme here, where each signatory signs the same message. The scheme works as follows:

Note that in the preceding ordering of public keys, some deterministic convention should be used, such as the lexicographical order of the serialized keys.

Notice that the only departure here from a standard Schnorr signature is the inclusion of the factor \( a_i \).

Verification is done by confirming that as usual:

As a final demonstration, let’s show how MuSig defeats the cancellation attack from the naïve signature scheme. Using the same idea as in the Key Cancellation Attack section, Bob has provided fake values for his nonce and public keys:

This leads to both Alice and Bob calculating the following “shared” values:

Bob then tries to construct a unilateral signature following MuSig:

Let’s assume for now that \( k_s \) doesn’t need to be Bob’s private key, but that he can derive it using information he knows. For this to be a valid signature, it must verify to \( R + eX \). So therefore:

In the previous attack, Bob had all the information he needed on the right-hand side of the analogous calculation. In MuSig, Bob must somehow know Alice’s private key and the faked private key (the terms don’t cancel anymore) in order to create a unilateral signature, and so his cancellation attack is defeated.

It’s critical that a new nonce be chosen for every signing ceremony. The best way to do this is to make use of a cryptographically secure (pseudo-)random number generator (CSPRNG).

But even if this is the case, let’s say an attacker can trick us into signing a new message by “rewinding” the signing ceremony to the point where partial signatures are generated. At this point, the attacker provides a different message, \( e’ = H(…||m’) ) to sign. Not suspecting any foul play, each party calculates their partial signature:

Everything on the right-hand side of the final equation is known by the attacker and thus he can trivially extract everybody’s private key. It’s difficult to protect against this kind of attack. One way to is make it difficult (or impossible) to stop and restart signing ceremonies. If a multi-sig ceremony gets interrupted, then you need to start from step one again. This is fairly unergonomic, but until a more robust solution comes along, it may be the best we have!

This is very brief overview. There are better, and more complete introductions out there
cryptography

Scriptless Scripts are a means to execute smart contracts off-chain, through the use of Schnorr signatures.
cryptography